My favorite kind of post to write is one whose title is a cliché. Don’t you agree?

As far as I understand, it’s spring! We’ve been having some bipolar weather around here in L.A.; last week it was really cold (well, for April in the Southland, 60º is cold) and then on Friday it was like the deluge, with thunder and lightning and everything. And today, it’s 85º. Woot!

It’s time to start admiring the garden again. When I actually take time out to go look at actual living plants in the real world, I’m always wonderstruck. It’s probably a sign that I don’t spend enough time outdoors, but I also love being fascinated by simple things. It makes it easy to entertain yourself.

While I was in the garden yesterday, I noticed a pattern of plants defying the odds. I found some plants in unusual places, and I thought, “how on earth did you grow there? Against all odds?” (Cue Phil Collins song.) Plants seem so delicate and vulnerable, and since you can’t actually see them growing, they appear static. And then all of a sudden, the ivy has completely disassembled my wooden fence. How can it do that? How can this little plant take apart a well-constructed barrier?

Here are a few of the “how in the world…” moments I experienced yesterday. 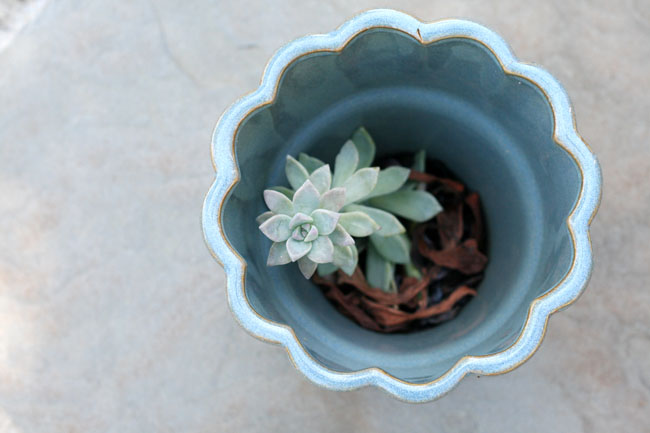 This is an empty pot. At least, last time I looked at it, it was empty. Over the season, some leaves apparently fell in it. And then, a succulent fell in it? This succulent is flourishing in about 1/4″ of decomposing leaves. When I saw it, I couldn’t even believe it. This guy really wanted to grow here! 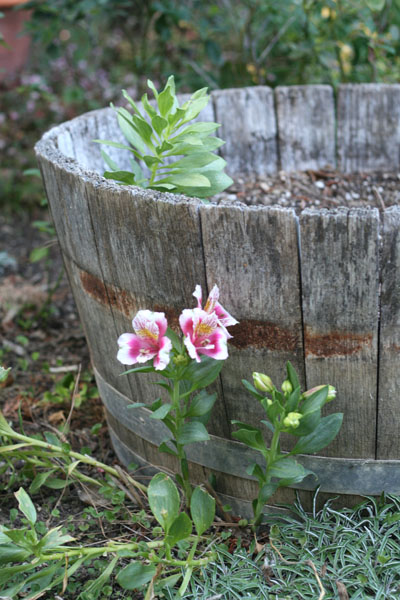 I like to use this half whiskey barrel to plant vegetables. When I put it in the garden, I kind of had to set it almost on top of this alstroemeria. No worries. It grew to the side, and just to annoy me, decided to grow up and through the barrel. See it inside? How did it do that? There is a bottom to this container; I guess it just somehow found an opening and then grew up through a good 12″ of soil. Good on ya, flower. 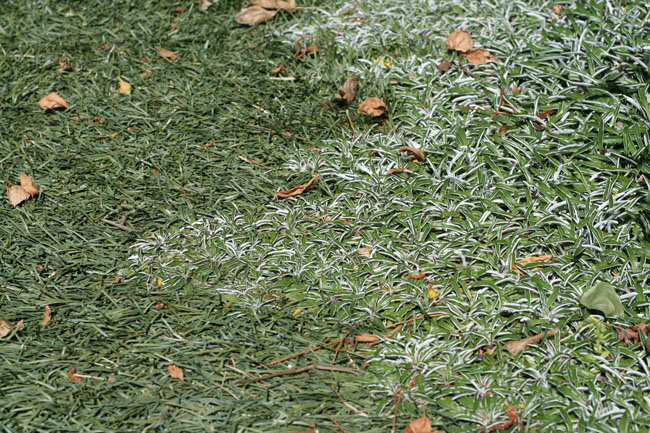 This is our front yard. It’s at the entrance to the play space, where we’ve installed artificial grass. Not to be thwarted, though, the ground cover in the garden beds has decided to move on in. You can see where the whitish-silver plant is growing onto the turf. It just grew right over that pesky fake grass. There’s no soil underneath, either, at least for a good 4″; they take out the soil and put decomposed granite underneath the fake grass for drainage or something. The photo should show all artificial turf; that’s how much the ground cover has encroached. I think it looks kind of nice, though, so I don’t begrudge it its space. 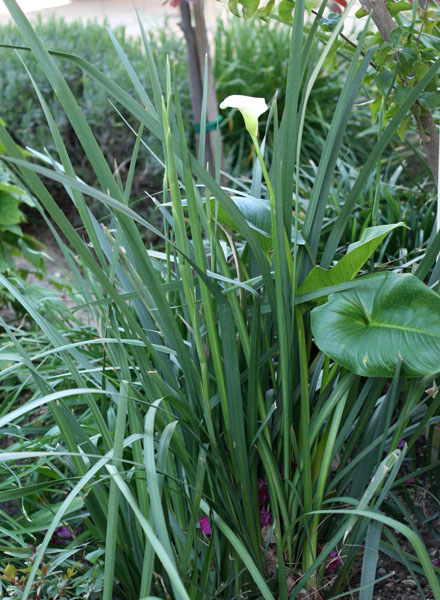 See that calla lily? Yeah, I’ve never planted a calla lily. There’s never been a calla lily in my garden. I literally just noticed it yesterday. How did you get there, lily friend? Maybe the bulb was buried and couldn’t quite get up the energy to blossom in past years. But we’ve been here for 7 years now, so that’s a pretty long hibernation. Anyway, welcome, calla!

What’s growing in your garden these days?