A Beginner’s Guide to Vine

Hey, readers, are you on Vine yet?

If you aren’t even sure what I’m talking about, Vine is a new service that allows you to post only 6 second videos. Not surprisingly, it is now owned by Twitter. Now, I’m not usually that much of an early-adopter, and I’m definitely not all that involved on Twitter. But I have to tell you I’m pretty excited about Vine.

Vine is an app that is currently only available on iOS devices. I would have to believe that’s going to change soon. Here’s what I’ve gleaned in my short relationship with Vine. 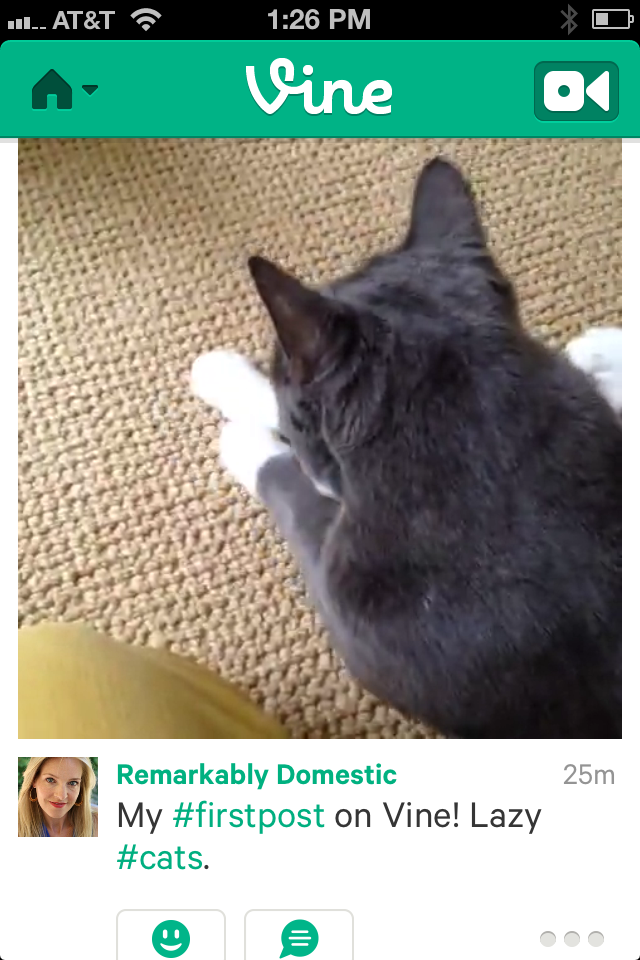 The interface is very similar to Instagram; you get a scrolling feed of your followers’ 6-second videos (as well as the “Editor’s Picks,” and it’s unclear right now how or if you can eliminate these videos from your stream). You can sign up by linking your Twitter account or by using your email. Once you’ve created your account, you can edit your profile. Unlike Twitter, there don’t appear to be unique “handles” that you use for your name; you can simply edit it to say whatever you want.

So, as you can see, you can find me on Vine as “Remarkably Domestic.”

You can search for people to follow through your address book, your Twitter feed, or by name.

You can also search for videos, either with keywords (and yes, Vine is also using hashtags like the rest of the universe) or by category. I assume these categories will be fluid, or perhaps they are simply the most popular hashtags, but I don’t expect New York Fashion Week to be up there all year.

To add your own video, you can only shoot from the Vine app; that is, you can’t create a cool 6-second video in iMovie, say, and then upload it to your Vine stream.

“Editing” video is simple in that the device only records when your finger is on the screen. So you can stop and start your short “film” as many times as you can tap your finger during the 6 second window. That means that stop motion is doable, as well as crude editing. I characterize it as crude simply because you must “edit” in the order in which your clips will appear; that is, it’s not really editing as much as it is stringing together a bunch of little clips.

Hailing in the valley! vine.co/v/bnYBFYL5YAD

In spite of these editing limitations, people are doing amazing things with this little app.

Evolution, History, Present and Future flash by in a 6s #LEGO #stopmotion vine.co/v/bnYqJxwTxLT

I think my hopes for Vine stem from its innate visuality. Twitter is all fine and good, but it seems to me that things are becoming more and more visually-oriented on the web, with Vine being a logical outgrowth of this trend and the trend towards brevity.