It’s gettin’ a little dicey around the RD Homestead again.

You’ll recall that, for some time, we were finding Wild Kingdom-style crime scenes in our yard nearly every morning.  Those killings appear to have largely stopped, or at least the evidence for them has disappeared.  But now we’ve got something new brewing in the yard.

Can I get a witness? 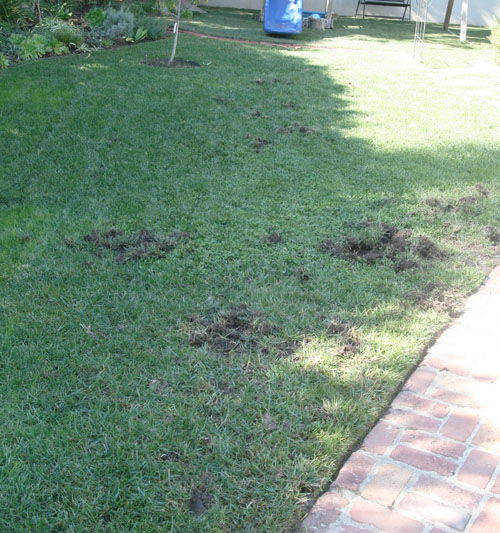 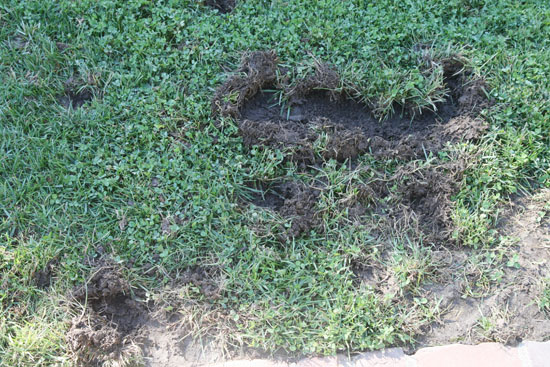 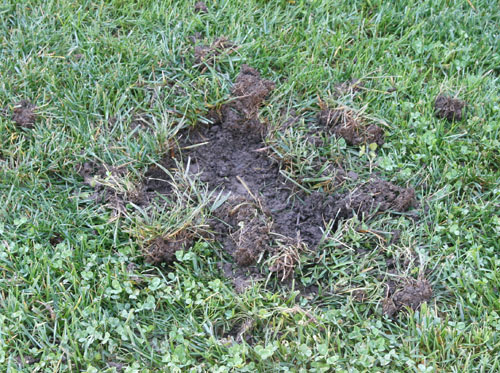 This is some pretty serious destruction.

Added to the mystery is another clue.  Several nights a week, at about 3 or 4 am, Caesar the Remarkably Domesticated Dog wakes up and goes slightly ballistic.  He clearly hears something outside, and he starts barking and growling and standing on his hind legs at the window of our bedroom.  It’s exceedingly disconcerting.

The other night, he was going so crazy I decided to get up to see what was driving him batty.  I couldn’t see much in the yard, but as soon as I flipped on a light, I locked eyes with three pretty large raccoons.  I wish I had been videotaping it, because they paused for a moment, and we all looked at each other, and then they all started falling over themselves trying to get through the fence and into the ivy and bushes on the other side.  If there had been a dialogue to the scene, it would’ve gone like this:

I only hope you are imagining this dialogue in the young-teenage-boy-caught-redhanded-then-flees voices in which I concocted it.

So, there’s that.  Another night, I was watching TV, and Caesar started losing it over something in the front yard.  I went to get a flash light, turned it on, and shined it right out the front door window.  BLOOP!  Immediately the beam hit a large skunk sniffing around the front yard.  Incidentally, right where much of this destruction has occurred.

Eye witness testimony would point to the skunk’s guilt, but could one skunk really do all that destruction?  Is he/she looking for bugs?  What the face?  And more importantly, how do I get rid of whatever is doing it?

Any advice for me?  What do you think it is?  And how do I get it to stop?

I’ll have something new and exciting for you tomorrow, so check back in soon!

Y’all, it’s the most wonderful time of the year: TOMATOMANIA!

I posted about my favorite tomato seedling sale last year, and of course I wouldn’t miss it this year for anything. Tomatomania is the self-billed largest heirloom seedling sale in the world.  It travels around, and it always comes to this little independent farm stand close to our home here in the San Fernando Valley area of Los Angeles.  (If you’re interested in attending, check out their future dates here; they are here in my area through tomorrow and then they travel around the country.)  They have over 300 varieties of tomato seedlings for sale, so if you like gardening, and particularly tomato gardening, this place is for you.

I got there on the first day so I’d have my pick of all the plants, and even so some were already sold out.  I brought my camera to take some photos to share:

chickens on the farm

rows and rows of tomato seedlings

and don't forget the basil!

I bought some strawberries, too

So, you’re dying to know what I got, right?  Here are this year’s winners:

So, that makes four snacking tomatoes (cherries and the like), which my kids love to pick and eat from the garden; two beefsteaks; three salad tomatoes; one paste tomato.

Wish me luck as I plant them.  I’m moving my plants to different areas this year because I think my garden plot is exhausted from tomatoes.  I will plant other things in that area this year, doing the crop rotation thing.

What are you planting this year, if you have a garden?

Just in case you were wondering, things are still being murdered in the yard around the RD house.

If you’ll recall, I’ve been finding blood stains in the mornings on my patio for some time now.  Something is killing something else and leaving a bloody trail of evidence.

I’m becoming more and more convinced that it’s the owl.  We do have an owl who (no pun intended) lives in the trees around our yard.  Or at least, he or she visits them because sometimes at sunset or sunrise, I can hear her hooting.  It’s kind of cool, considering that we really live in the city.

What is NOT cool is that this owl, if it is the owl, is a very messy eater.  And I cannot get the blood stains off of my patio.  One friend suggested hydrogen peroxide, which I promptly tried to no avail.  I mean, I’ve scrubbed these stains, and they don’t come off.  Maybe it’s the nature of the slate stones that grace our patio?  I don’t know, but it’s becoming embarrassing that they are all covered with blood.  People are going to start to talk, you know.

So, I thought I’d share the latest stains that I noticed when I was out doing the seaweed pressing.  Here we are:

Really, how gross is that?  It’s all dripping down, spreading out from the body of our poor victim.  That stain makes me imagine the struggle of the circle of life in a way I’m not comfortable with.

So, what do you think?  Owl?  And what do you suppose is the victim?  Rats?  Maybe desert rats, which we have, I think, and which are smaller than Willard and his friends Ben and Socrates or whoever you imagine when you think “rat.”

I can’t wait to see what kind of Google searches bring people to this page.

While I was kickin’ it at the beach collecting seaweed, things were busy growing around here.

Yesterday, the four-year-old and I picked the remains of the carrot harvest.  I will be planting more soon, but it seemed time to yank those puppies from the container.  We got a few good ones:

I asked the four-year-old to hold them while I took a photo.  He responded with, “No.  They’re dirty.”  Oy.

But I did get him to hold them by the stems.

He’s been doing this thing lately with photos where he puts on the goofiest, squintiest smile you’ve ever seen.  It’s like he’s Renee Zellweger or something.  I told him to smile like he was laughing, and then he opened his mouth wide.  I asked him why he was opening his mouth.  ”Because, it’s like I’m laughing, HAAAA!  HAAA!”  and he let out this crazy fake belly laugh.  I gave up.

We shall eat the carrots tomorrow.