On Not Having A Nutcracker 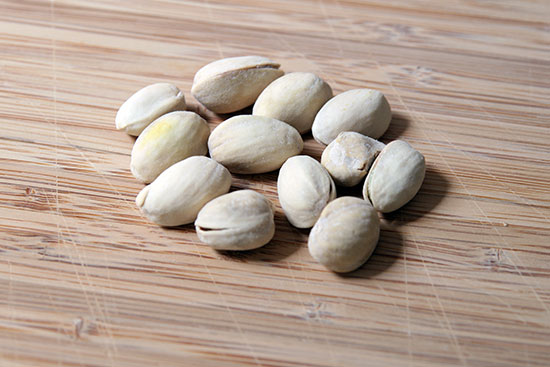 The other day, we were eating breakfast, and I had given the kids some pistachios. And you know how there’s always a few that don’t have that easy-to-open crack? They are hermetically sealed, and there is no way you are getting in there with just your bare fingers.

Usually, we just leave those nuts, and I throw them back in the bag for some reason until all we have left are the uncrackable nuts, and then generally I throw them away. This day, the kids asked RD Husband if he could help them crack the nuts.

He gave these nuts a good go, but they were, as I say, uncrackable. So he turned to me and he said, “Where’s the nutcracker?”

RD Husband laughed, too, but then he was all, “No, really, where’s the nutcracker?”

Friends, do you have a nutcracker? Who has a nutcracker these days? Honestly, the last time I saw a nutcracker IRL was at my grandparents’ house, decades ago, where they always had that bowl of nuts on the living room table that had actual walnuts like in the shell, and therefore you needed a nutcracker to access them. Do people buy those kind of nuts anymore? Honestly, I have no idea.

So we laughed for a while at the whole nutcracker issue, and then I had a brainstorm. And this is where this post turns into more than just the best story you’ve heard in the last 5 minutes and becomes an actual tip.

Because, facts are facts, and we still had those pesky pistachios and no nutcracker.

You, too, may find yourself in a bind with some sealed pistachios and nothing with which to crack them. Know what you do?

Pull out the garlic press.

That’s what I did. At first, I was going to pound them with the rolling pin, but I realized that wasn’t really the most delicate solution. So I got out the garlic press, stuck a nut inside, and gently, gently squeezed until I heard a distinct crack. Lo and behold, that nut was cracked, both literally and figuratively. 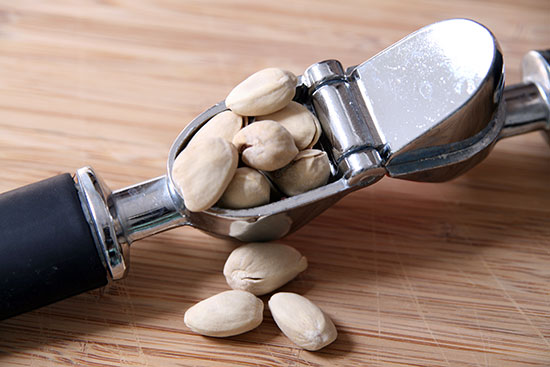 You can thank me later when you have a plateful of delicious pistachios meats and not a shell to be found.

I have a small laundry problem. It looks like this:

I’ve known about this problem for some time. And my question is, does anyone else have this problem?

Or, alternatively, since I’m the one doing the laundry, I only put something in the hamper when I know it’s for sure dirty. I’m just going to have to wash it!

Since I’ve been thinking about this issue (is it even an issue? is this simply the way of the universe? or am I the only one with the mini pile?), I have a few questions for you readers.

I’m doing an informal survey. Inquiring minds want to know. I’m terribly interested in your laundry habits, so spill it in the comments. Feel free to remain anonymous if it’s too embarrassing. 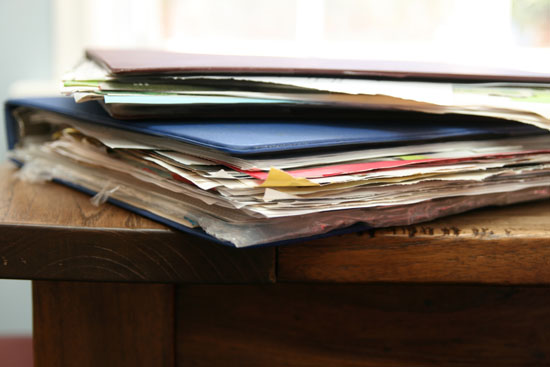 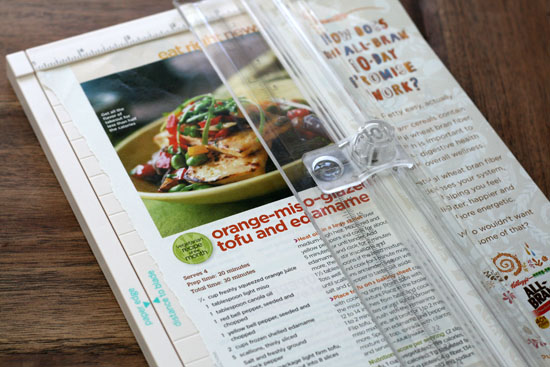 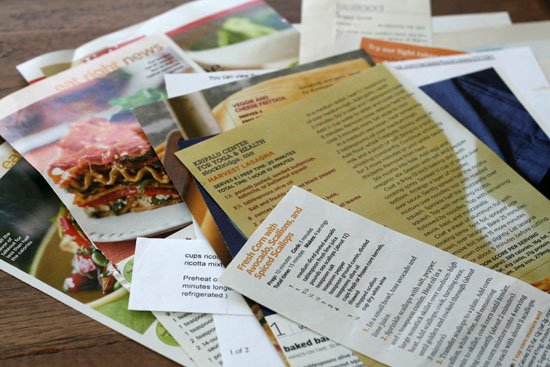 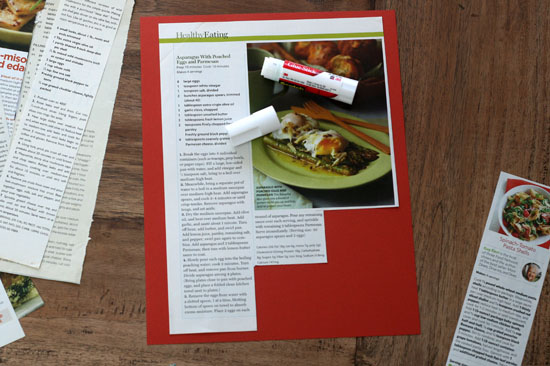 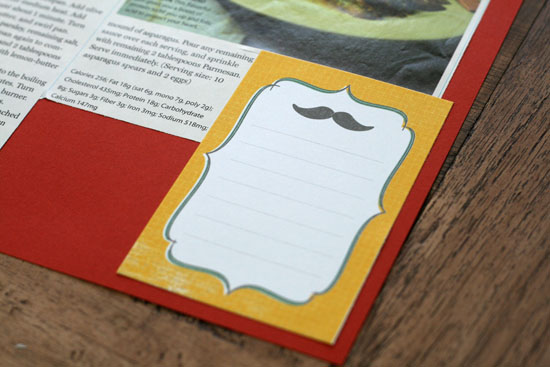 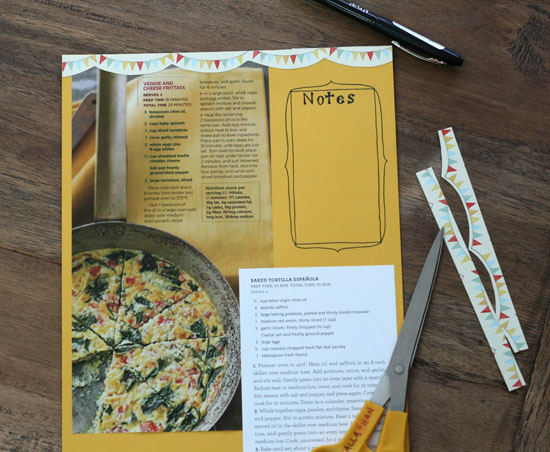 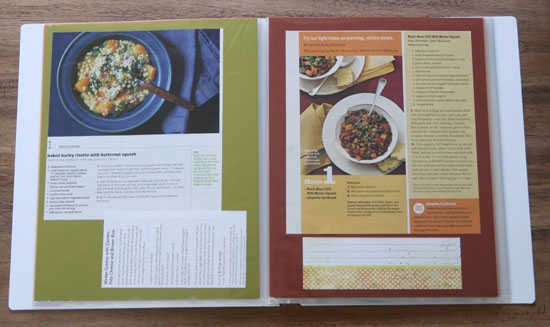 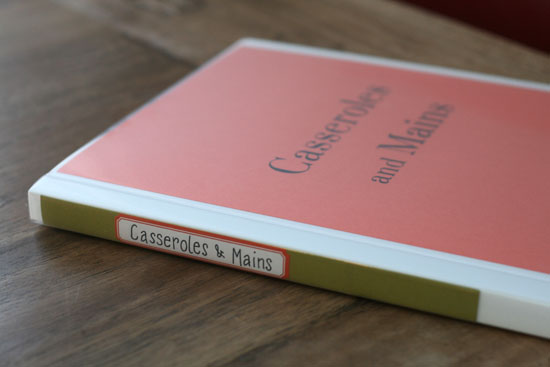 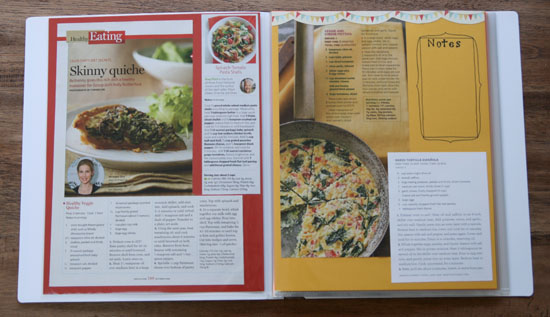 I can’t really call it a craft room tour, since I don’t have my own room dedicated to crafting. Someday!

After I showed you my new cutting/sewing table set up, I mentioned I’d give you the rest of the tour. So here goes. 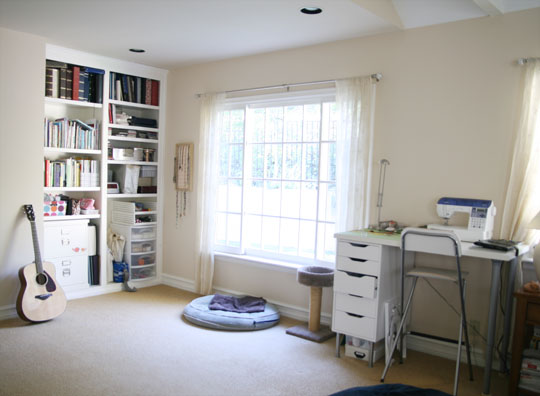 This is a kind of overview of about 2/3 of the space. You see my new addition on the right, which is, of course, flanked by cat beds. That large pillowy one used to be a dog bed, but the cat totally appropriated it. So I got the dog a bigger new one and let the cats go crazy with that one. Sometimes they like to snuggle in it. 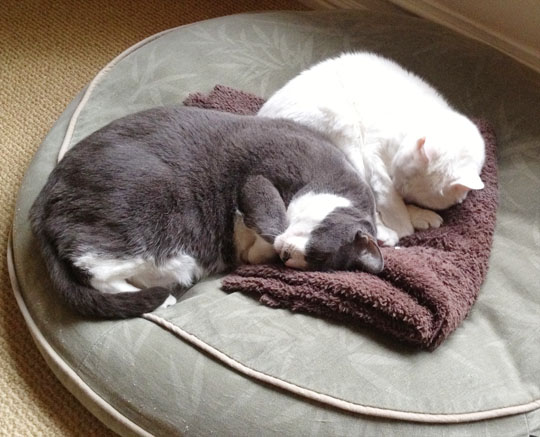 To the left of the window, you’ll find my homemade necklace/jewelry holder (tutorial here!) and the built-in shelves, almost all of which I’ve taken over with craft stuff. 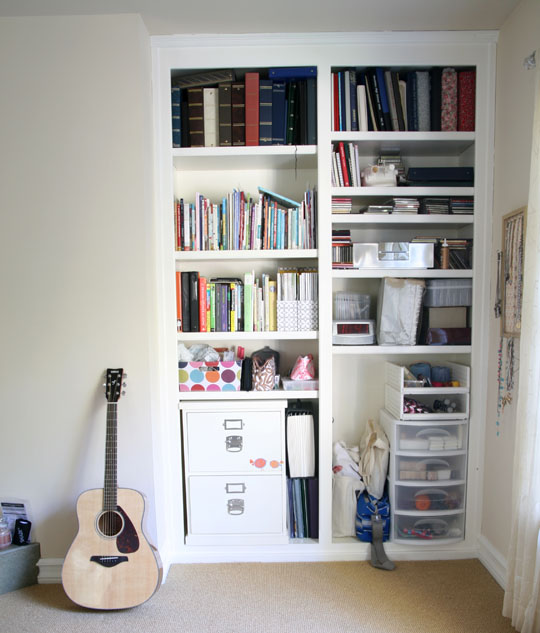 On these shelves I have all my craft books (they’re really starting to become a whole library!), jewelry making supplies (on the shelf below the books), and a filing cabinet that has my files in one drawer and then another drawer filled with paper, stickers, etc. I also have a bazillion photos to scrapbook, or do something with, and a plastic set of drawers that holds stamps and other miscellaneous things.

What you can’t really see in the initial photo is what is to the right of everything else, which is this wall with a fireplace and my desk. 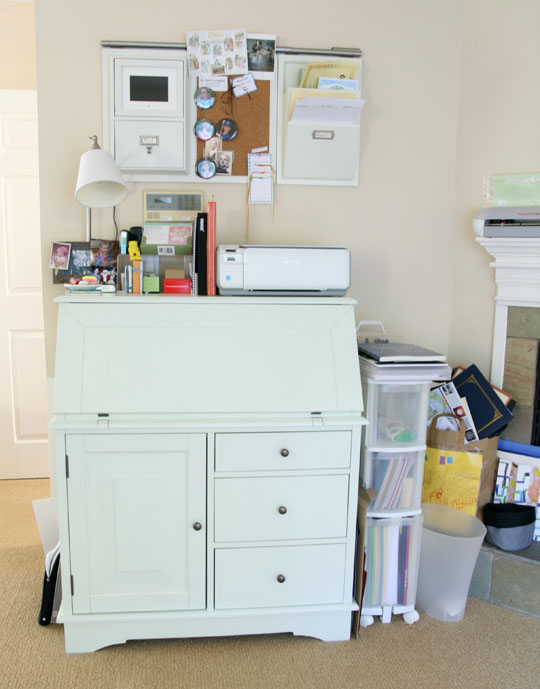 I used to sew at that desk, hauling the machine up and down whenever I wanted to use it. I’ve got the printer on top of the desk, and on the mantel of the fireplace I keep my Silhouette and some small file holders. See that jumbled mess all the way to the right? That’s all the kids’ artwork I’m trying to corral. On top of the thin rolling plastic drawers, I have all my new calligraphy supplies… calligraphy is my latest obsession.

I love this desk because it folds down. Here’s what it looks like when I’m working: 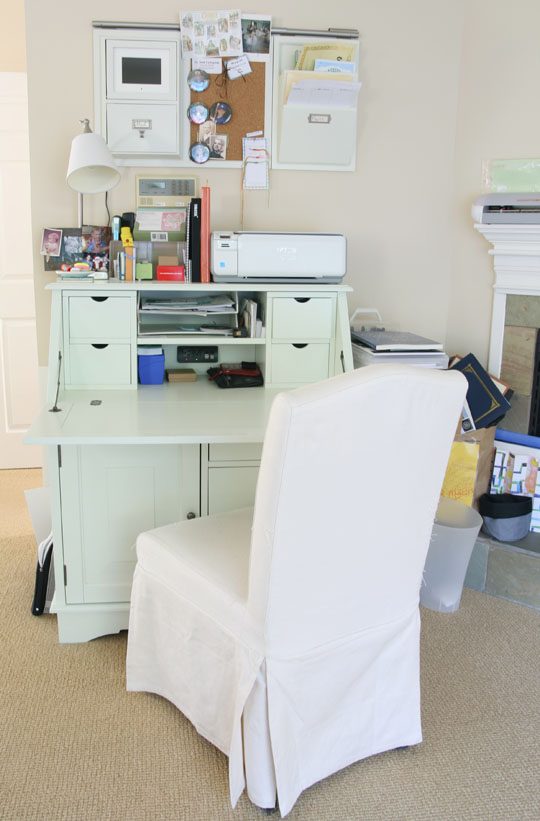 Now, come, look inside my drawers… 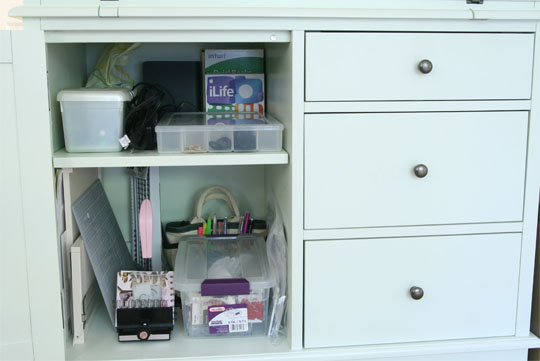 Ok, well, this isn’t a drawer, it’s just the cupboard in the desk. But that’s where I keep extra sewing supplies, cutting boards and paper cutters, my new Bind-It-All (LOVE!), and other miscellaneous things that don’t fit anywhere else.

In the middle drawer of the desk you’ll find punches, 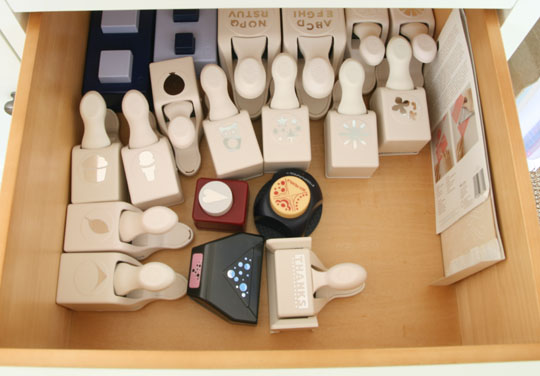 and in the other drawers I have paper and stationery. In the plastic drawers on the built-in shelving you’ll find stamps and ink pads, 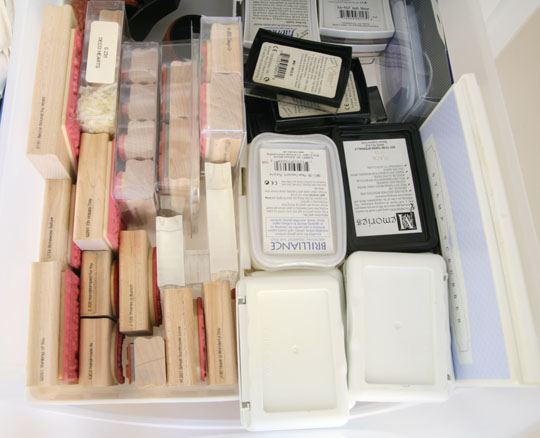 a drawer of cool yarns for which I only have one skein, and a drawer of total miscellany: 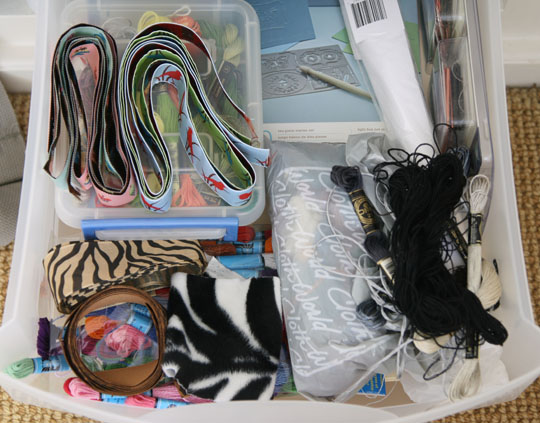 I’m not even sure what’s in there at this point. And I just reorganized it.

I thought you might want to see my main craft books up close, so here you go: 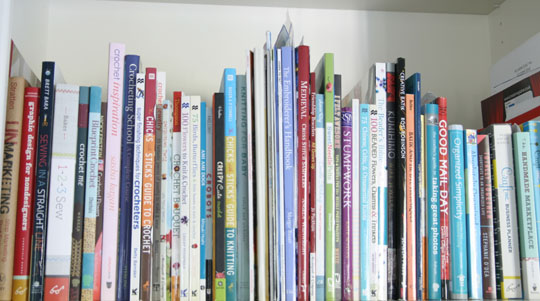 I need to start making more things from these books!

So that’s the place where it all happens. Mostly. I have a whole other studio in the garage, but that’s a completely different story.